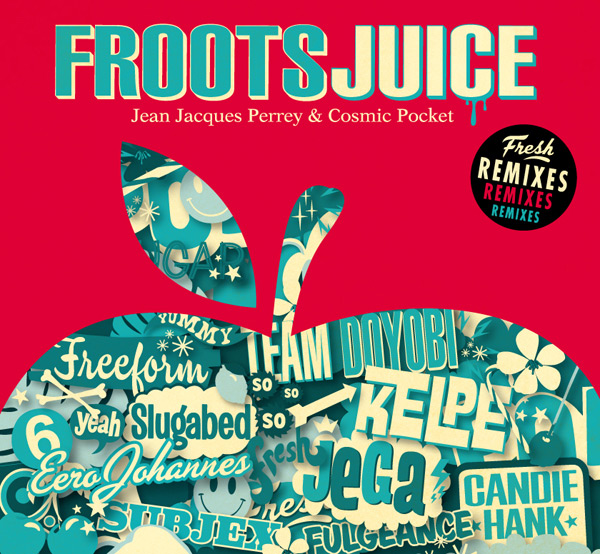 Hold you breath and check this incredible list of (29!!!) remixers :

This is the ultimate sonic smoothie, a wide range of flavors and interpretations of Jean Jacques and Cosmic tasty work. Skweee, dubstep , wonky, IDM, drill’n bass, comedy glitch, breakbeat, collage, techno and other unidentified styles are all represented. A passionating trip inside JJP’s heritage. 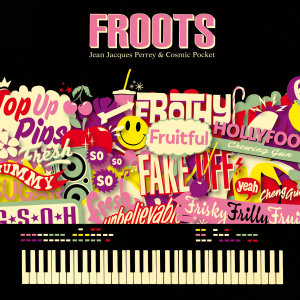 Jean Jacques Perrey, the living legend and pioneer of electronic music is back with this new marvelous album made in passionate collaboration with his spiritual son, and homebrew InVitro artist, Cosmic Pocket. The result of this alchemy is an incredibly refreshing, off-kilter, playful yet intricate album that manages to catch JJP’s unique style, extend it and fuse it with the more “modern” and glitch oriented touch of Cosmic Pocket.A perfect osmosis, faithful to the genuine Perrey vibe, that bridges a link between early and modern, easiness and complexity, pop and experimental. Unclassifiable and unforgettable.

What other artist can say they have worked with Charles Trenet and Fat Slim Boy, DJ Premier and Gangstarr, Ice T and Jean Cocteau, Edith Piaf and Caroll Bratmann, Gershon Kingsley and Walt Disney, Pierre Schaeffer and Robert Moog, Luke Vibert and Dana Coutryman, Air and David Chazam and many others? Jean Jacques Perrey is an 80 year-old electronic enigma.

Born in 1929, during the Great Depression, Perrey has collaborated with such iconic artists as Robert Moog the inventor of the synthesizer of the same name and then composed Moog Indigo on which appears the planetary title E.V.A., the most sampled root of hip hop and Walt Disney on burlesque tracks for his cartoons. ‘Baroque Hoedown’ one of the first compositions became the official hymn of The Main Street Electrical Parade which lives on in all the Disneyland’s since its re-orchestration by Don Dorsey, the current Disney musical director and sound designer.

It is precisely on a ‘Cartoons Animation’ that the ears of the tender CosmicPocket makes their first musical steps. Proof, if there need be, that the inventive music of Jean Jacques Perry is not popular only among the happy few or the big names of the genre, but the households of France are bursting with nuggets of jingles and television credits bearing the master’s stamp. By the time it takes CosmicPocket to develop his first musical arms, Jean Jacques Perrey, subject of many samples and remixes, keeps pushing his ever more avant-garde creativity and his sharp sense of melody.

His instrumental virtuosity is put to the service of therapeutic music mixed with delphinian research while the teen Cosmic discovers old pieces of jazz matiné with Rock, Surf, Jungle, rave… and learns to create his own sounds on the synthesizer. Yet always in the muted background the burlesque nursery rhymes of the master Jean Jacques pervade his mind. When CosmicPocket releases his first opus, Astral Tales, on InVitro Records, Jean Jacques Perrey finishes an exchange of loops with renown producer Luke Vibert that will give birth to another ‘Moog’: Moog Acid on Lo Recordings. By objective chance, Astral Tales is also as spacey and into space as ‘Destination Space’ which is still under construction by the master of electro. The idea less crazy than obvious comes to CosmicPocket, who knows nothing of these projects, to send Jean Jacques his freshly pressed album whose themes and crazy tones vibrate less like a remix than the original composition from a parallel world to the facetious universe of Jean Jacques, the roguish virtuoso.

The confidence in the “fantasy” of the young CosmicPocket develops over the course of their exchanges and nourishes a new album project for which Jean Jacques Perrey travels to the Invitro Studio in France for three one week artist-in-residence sessions, producing the eccentric extravagance of the Froots album. The experienced artist took a step back to allow the youngster he guides to express himself in his proliferation of ideas, of his own musical madness and arrangements of a rare delicacy.

Finally, the two play-mates produced a humour filled album: a very happy music album in the same vein as Perrey’s first forays into the world of music all those years ago. “Today, more than ever, mankind continues to face so many negative influences,” concludes Jean Jacques. “So, many years ago I decided to make it my musical mission to contribute by bringing more optimism, humor and faith in the future to all my brothers and sisters of this planet.” His collaboration with CosmicPocket is yet another step on his life long mission path.